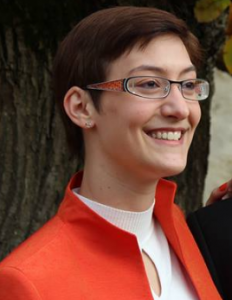 From Ile de France, Delphine Desusclade could perfect her Japanese-French-English translator education thanks to her foreign trips such as New York or Tokyo. Being a huge literature and comic enthusiast, this translator’s education comes to her mind naturally, but being able to convey people what a text means, from a language to another, has encouraged this choice. Faithful to Juno Publishing, she had already translated the Melissa Collins novel “On solid ground” and the Silvia Violet “Burning up: Fitting in” third book. She has also worked on a Juno Publishing future release which will be titled “Vespertine” by Leta Blake, but also on a manga which has been much talked about, Nakamura Asumiko’s “Doukyusei” published by Boy’s Love IDP.

Come and listen to what she has to tell us during the round-table “Manga and novel: homo-fiction’s translation”, her translator experience on both platforms so as her touch of fantasy will captivate you.