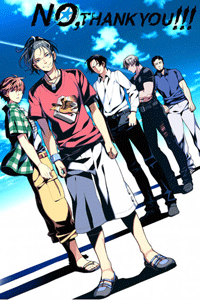 No, Thank You!!! became rapidly popular due to the overall quality of its production: be it stories, graphics, voices, music and undeniable eroticism. Let’s note that the main character is a seme and that an option allows to customize the pilosity of its characters!

Synopsis: This summer vacation begins with a car accident…
Our protagonist protects a man from an out of control car, but gets hit and loses his memory in the process. The man he saved happens to be the owner of a jazz bar, sótano. Out of sympathy for his hapless savior, the man decides to set him up with a job and a place to live.
From the outside, sótano looks like a cozy little jazz bar, but behind the scenes they solve problems that the police and legitimate detective agencies won’t touch. The staff there give our protagonist the name “Haru”. He gradually makes his way deeper into the organization, and the hearts and lives of the staff, while working as an apprentice bartender. But just who is Haru really…?

Kindred Spirits On The Roof 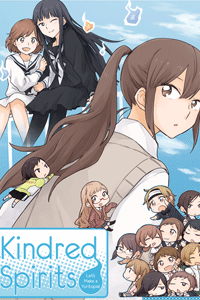 f yuri genre has been for a long time all about male audience and big boobs, more and more titles are taking a strong interest in romantic plots. Part of this trend, KSOTR is a super cute game that will transform a school in a “yuritopia”.

Synopsis: Kokonotsuboshi Girls’ Academy of Commerce, a school built on the site of an old castle, known as “Shirojo.” Toomi Yuna spends her time here on her own, until one day her lunch on the roof is suddenly interrupted by a pair of ghosts.
Enoki Sachi, who died in an accident before the war, and Nagatani Megumi, who died of illness thirty years ago. These “kindred spirits” died with unrequited feelings in their hearts, met, and fell in love. They hold an ardent wish to experience their “first time” together before their eternal rest.
…But they don’t know how.
The two haunting spirits enlist Yuna to help them foster more “yuri” couples at the school, to assist girls struggling with their hidden feelings, and with the hope that their successes will help them glean the insight they need. 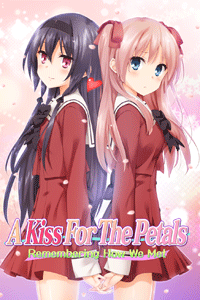 In this chapter of the cult series A Kiss For The Petals, Risa and Miya remember their first encounter and how they became a couple. One of the few yuri titles that does not have any H scenes!

Synopsis: The season is Fall… as the uniforms transition from Summer to Winter garments, Risa suddenly has a pang of nostalgia. It was this very uniform she was wearing on her first day at St. Michael’s… The day she met her future girlfriend Miya.
Now the two of them share a passionate life as a couple living in Risa’s apartment, but there was a time in their relationship when the very sight of one another would be enough to set off an endless bout of arguing. From Risa’s point of view, it all started with her just trying to get Miya to come to class…
And even now with the two of them going out, the chronically truant girl has failed to mend her ways.
Remembering those days elicits a faint laugh from Risa. Sitting alongside her, Miya reacts to Risa’s sudden outburst with a puzzled expression.
“I was just thinking back… About when we first met.”
It was a beautiful spring day, with sakura petals dancing in the air.
The day of her unforgettable first encounter with Miya…

A Kiss For The Petals: The New Generation 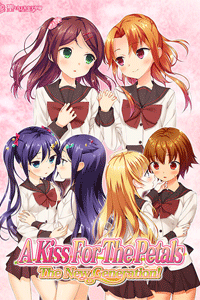 In this chapter of the cult series A Kiss For The Petals (or SonoHana), we go to the school annex… All the components that made this series such a huge success are gathered again, with new characters!

Synopsis: At the Saint Michael Girls’ School… festivities erupted among the girls of the annex. The reason for their celebration is the Best Couples poll being held at the main campus. The students at the annex, who look up to the girls from the main campus, decided, “Let’s have our own Best Couples!”
…It was always inevitable.
And so, the fairest and most intimate couples were nominated…
The first couple is a pair of childhood friends, Misawa Nagisa and Takahata Rina. The second couple is a pair of twin sisters, Kimishima Ai and her younger sister Aya. And finally… The transfer student who saw this whole thing as no concern of hers, Onohara Hazuki, is shocked to hear that she too, was chosen to be among the Best Couples.
Moreover, her partner is the sheltered young debutante, Suoh Manami. Actually, Hazuki has secretly been crushing on the impeccable Manami… But the truth is, they’re far from a couple, and while their classmates may cheer them on, it’s all in vain.
But then… Hazuki works up all her courage to ask Manami to become a “Best Couple” with her, and…

Coming Out On Top 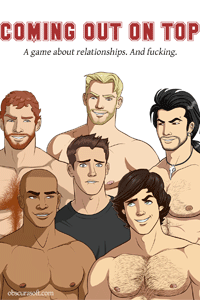 Huge success on Kickstarter, Coming Out On Top allies all kind of fans: you like comics? or dating-sim? or Boy’s Love? or bara? Then you will enjoy this interactive, fun, and very, very sexy story.

Synopsis: Coming Out on Top is a choose-your-own-fate game which places you in the role of college senior, Mark Matthews. You’re about to come out of the closet and are ready to make up for lost time. With the help of your loyal roommates, play through six hilarious routes and ten unforgettable dates. 18 hot guys are waiting for you to win them over.