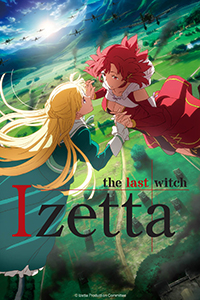 Izetta The Last Witch is certainly the yurists’ favorite anime in 2016! Screenwrited by Hiroyuki Yoshino and directed by Masaya Fujimori, this anime immerses in Europe, during wartime, where Finé tries to save her kingdom from the Germania’s threat. She will find the help of Izetta, the last witch with amazing powers. Even if romance is not the anime’s main point, the relationship between Fin and Izetta aroused the fans’ passion.

Synopsis : The time is pre-World War II and the setting is a European-like imaginary world. A large-scale war erupts and bloody battles are taking place throughout the world. Eylstadt is a small country that lacks a strong military force and natural resources. Finé, who is the crown queen of Eylstadt, decides to use a secret weapon against larger countries, in a time where battling against larger countries was unthinkable. The secret weapon is a witch named Izetta, who uses her magical force to fight. The young witch Izetta is the last survivor of her kind, and is notable for her burning red hair.