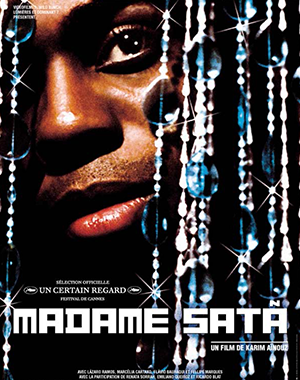 Madame Sata is a touching movie, with dramatic sides, first Karim Ainouz’s feature film. The movie buries yourself in a dark and misery universe in 1930s’ Rio. There appears, a tall, strong and gangster character who aspires to be in the front of the stage, singing with a mask of glitter. All in all, Madame Sata is the vision of a man far away from stereotypes and prejudices, who is at ease with his differences and his passions. The movie was presented in the Official Selection of Cannes Film Festival in 2002 and also received many prizes from others, notably for Lazaro Ramos’ acting skills.

Synopsis: Legendary criminal. Proud homosexual. Cabaret star. Passionate lover. Killer. Devoted father of seven adopted children. Saint or devil? Madame Sata. Born to slaves in the arid wastes of Northern Brazil and sold by his mother at the age of 7, he pursued his freedom on the mean streets of Lapa, Rio de Janeiro. Jet-black, six feet tall, 13 stone of proud muscle in a silk shirt and tight pants, a cut-throat razor in his back pocket. Karin Ainouz’s extraordinary portrait of the triumphs and tragedy of this explosive and paradoxical personality unfolds against the vibrant, sordid background of Lapa: thronging underworld of pimps and whores, of cut-throats, queers and artists, of dark bars and brothels thick with smoke, drenched in sweat and cheap perfume. A world run through with violence and raw desire, where desperate dreams spring from poverty and squalor.