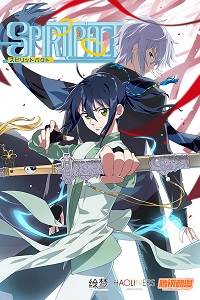 Spiritpact is an online published manhua (chinese comics) by Pingzi. The animated series adaptation was released online in China in 2016, then aired in Japan and streamed out of Asia by Crunchyroll in January 2017.
Our team picked out two specific episodes for you to enjoy, following a short introduction to Danmei (Chinese BL) in China given by Yao Zhao, a PhD working on BL.

Synopsis : You Keika, the heir of an old famous family of Exorcists, is stricken with poverty after losing his parents and struggles as a street fortune teller and a part time computer tech. One night at a junkyard, he meets a mysterious and charismatic Exorcist, Tanmoku Ki, who is fighting an evil spirit. To compound his misfortunes, he gets hit by car and becomes a ghost. Tanmoku Ki appears and asks You Keika to make a “pact” with him to fight Evil Spirits together. Here starts the friendship of our heroes!